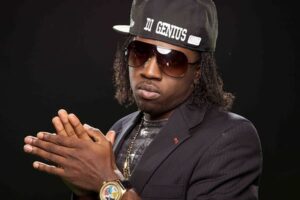 The sons of venerated Jamaican singer Freddie McGregor, Daniel “Chino” McGregor and Stephen “Di Genius” McGregor grew up accompanying their father on his tours all over the world and watching him in his Big Ship recording studio producing his music and that of other Jamaican luminaries including Judy Mowatt, Luciano and the late Dennis Brown. Like their father whose storied career began at just seven years old, Chino and Di Genius each demonstrated precocious musical talent, as instrumentalists, producers, songwriters and vocalists. Chino is an internationally recognized sing-jay responsible for numerous dancehall and reggae hits including “Red Bull and Guinness”, “Pon Yuh Head” and the motivational anthem “Never Change (From Mawning)”. Chino has sung alongside his father on several tracks including “There’s A Reward for Me” featured on Freddie’s Grammy nominated album “Anything For You”; he was named Best Male Sing-jay at Jamaica’s Excellence in Music and Entertainment Awards in 2010 and Entertainer of the Year by New York City based Linkage Radio Awards in 2011. The widespread appeal of Chino’s music has earned him several major endorsement deals in Jamaica for companies such as Coca Cola and Nestles.

Chino and Stephen’s latest project Great Minds Think Alike (GMTA) pinpoints the commonality among pioneering artists across various genres that have impacted the brothers’ musical development. “It was Stephen’s idea to put GMTA together, to have a well thought out album from intro to outro, with many exclusives, that tells a story, shows what has influenced us and explains who we are as musicians,” comments Chino. “With this album we are paying homage to what we grew up on, that’s why we say great minds think alike because it’s a melting pot of great music,” adds Stephen who contributes vocals, alongside Chino, on every track. Stephen’s groundbreaking production brilliantly juxtaposes searing roots reggae rhythms and jaunty ska beats, contemporary R&B grooves and vintage soul snippets, live music and sampled riffs, sung vocals and spoken words into an ambitious yet cohesive musical odyssey.

It is said the depth of a tree’s roots determines the strength of its branches: despite making their respective names as a dancehall artist and producer, Chino and Stephen pay homage to Jamaican music’s foundation on GMTA’s opening track, “Roots Sound”. Classic Jamaican dance moves such as the Water Pumpy and Della Move are referenced on this tough edged roots reggae cut, as are stalwart bands Third World and Inner Circle. “We start the album with the real root because roots reggae put Jamaica ‘pon top,” asserts Stephen, “so we pay homage to the culture that came before us, the persons that gave us the opportunity to do what we are doing today.” Roots reggae is heard throughout GMTA, including on the first single “Zero Tolerance”, released in late March. Drawing from the uncompromising stances of the Black Lives Matter and Occupy movements as well as the outcries from Jamaica’s underprivileged communities, “Zero Tolerance” expresses the masses unwillingness to accept systematic oppression. “This song’s lyrics came together naturally because it is what the people have been saying for the longest time,” Chino explains. “It’s a thought provoking song that is resonating everywhere because these are global issues, how much more injustice and inequality can people tolerate?”

Stephen and Chino wrote “Top Class” following a conversation with Tarrus Riley, son of the late legendary singer Jimmy Riley; the song conveys the obligations that accompany being the offspring of a musical heroes. “Our parents accomplished what they did and became icons,” notes Chino, “so we have to acknowledge that in whatever we do, especially in our music, and carry ourselves in a manner almost like royalty because that is our responsibility.” Also bearing royal reggae lineage are Bob Marley’s sons Stephen and Damian who join Chino and Stephen on the solidarity anthem “Brother Brother”.

Stephen sings lead and Chino provides supportive raps over a rollicking ska beat on “I’ll Be Alright”, which samples the introduction to seminal ska group The Skatalites’ 1965 jubilant instrumental “Guns of Navarone”. “We specifically sampled the Skatalites to reintroduce that part of Jamaican culture to our generation, most of whom don’t listen to ska,” said Stephen, 26. “We are in a position to influence what is happening now, to bridge a gap, so we want people to know about this music because it’s important for the preservation of our culture.”

The brothers also pay tribute to 1970s soul by creating the smooth jams heard on the Zodiac influenced “Sign” and “Talk”, featuring Chi Ching Ching and Agent Sasco and best described as Superfly cool meets dancehall grit. A spoken reference to the New Testament’s Book of John 3:15 “who so believeth in him shall have eternal life”, utilized on the hip hop flavored “Eternal”, conveys the immortality of the works by the numerous singers and players of instruments who have profoundly influenced the direction of GMTA.

The album closes with a return to one-drop reggae on “Family” produced by Stephen and Chino’s close friends, Japan’s Gachapan Records. The song is a heartfelt expression of unity, irrespective of race, class or creed (“even though we not related by blood, we related by love, through thick and thin, through different color skin”) and a fitting conclusion to an all-encompassing sonic journey that not only crosses musical boundaries, it completely obliterates them. “The album’s flow and concept are totally unorthodox but it goes back to paying homage,” Chino declares. “Bob Marley and Dennis Brown, Shabba Ranks and Super Cat, Michael Jackson and Whitney Houston, Biggie and Tupac, our aim in making music is not just to please ourselves but to make all of these people proud, the ones that are living and even the ones that have passed. By doing that, hopefully, we can influence another generation.”

Great Minds Think Alike is due for a summer release, in digital and physical formats, through The Orchard.