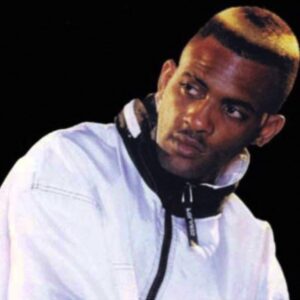 Jamaican born singer Buccaneer, first came into the spotlight back in 1994, and since then has been considered a ‘great’, amongst Dancehall stalwarts. Buccaneer stood out from the crowd with his peculiar appearance, flaunting an eye patch, and his hair bleached in gold and black rings.

His rise to stardom shortly followed the release of his hit single Hey Yah Hey Yah. His career flourished, having had huge successes working with producers such as Patrick Roberts and King Jammy on several singles, including collaborations with Wayne Wonder on the hit Sensi Ride and then again on Trust .His debut album, Now There Goes The Neighbourhood, was released in 1995, with production from Roberts, Bobby Digital, Dave Kelly, and Danny Browne. That same year Buccaneer delivered a spectacular performance at the Reggae Sumfest festival. Several of his hits were based on opera music, including his 1995 hit Skettel Concerto, based on the opera classic, The Marriage of Figaro.

He released his second album Classic which further showcased the opera theme, with tracks based on Moonlight Sonata and Blue Danube Waltz, His third album Da Opera released in 1998, used Enya’s Orinoco Flow as the basis for his hit Fade Away.

Buccaneer saw further success with his hits, Kill a Sound, Little John Hits Medley, Hot to Ratid, and the Lexxus-produced Freedom of Speech. His collaborations on the hits Hot Bwoy featuring Dancehall veteran, Beenie Man and Bruk Out, a collaboration with US punk rock band Rancid was well received by fans both locally and internationally.

Buccaneer moved into production, to set up his own Opera House label. He was the first to record popular Dancehall artiste, Mavado and has produced recordings by the International Grammy award winning Sean Paul, Dancehall powerhouse Vybz Kartel, and crossover artiste Tami Chynn.

He has seen recent success in 2014 with the release of his older collection of material, The Darkside, which featured guest performances from 112, Damian Marley, Spragga Benz, and Lady Saw.