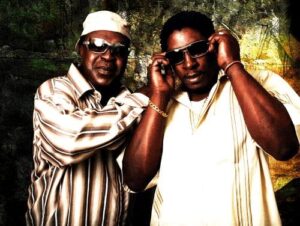 Chaka Demus & Pliers are a Jamaican reggae duo made up of deejay Chaka Demus (born John Taylor) and singerPliers (born Everton Bonner), known for their hits “Tease Me” and “Murder she wrote”. As a duo, they enjoyed more commercial success with mainstream pop fans after their collaboration began in the early 1990s than either had in his previous solo career.

Both artists were established musicians when they teamed up and earned international recognition during the early 1990s, particularly in the United Kingdom, where they became the first Jamaican act to have three consecutive Top five hits on the UK Singles Chart; a record unsurpassed until Shaggy scored four consecutive Top five hits in Britain in 2001. Their first UK chart hit, “Tease Me”, stayed in the Top five of the UK Singles Chart for three months in 1993, peaking at number three on the chart in July of that year. After releasing a cover of the Top Notes’ “Twist and Shout”, the song topped the UK Singles Chart, in early 1994. The duo’s other Top twenty placements were “She Don’t Let Nobody” (UK #4), “I Wanna Be Your Man” (UK #19), and “Gal Wine” (UK #20), with six hit singles in all taken from their debut album, Tease Me.[2] The re-release of Tease Me also charted at number one on the UK Albums Chart, in 1994; The album went on receive gold certification, selling more than 500,000 copies. Pliers is one of the Bonner brothers, all of whom are reggae artists, including Richie Spice and Spanner Banner.

In 2007, Chaka Demus & Pliers reunited to record a track called “Need Your Lovin” which was released on vinyl, on Explorer Records. This song remained high on the Jamaican chart.

On 18 November 2007, Chaka Demus & Pliers performed “Murder She Wrote” alongside Alicia Keys at the 2007 American Music Awards. In the summer of 2008, they performed at the annual Detroit Caribbean Festival. Their latest album So Proud was released on 6 October 2008.