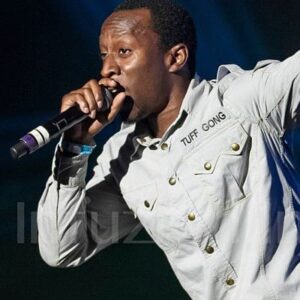 Christopher Lamour Ellis was born the youngest male progeny to “The Godfather of Jamaican Rocksteady”, the late Alton Ellis and Sigma Ellis. Talented in his own right, the soulful 30 year-old Lover’s Rock, Roots Reggae, R&B crooner has been astounding audiences with his incredibly natural, smooth vocal stylings since the age of 11. The Jamaica Gleaner notes, “His look and sound closely mirror those of his dad, he has beyond a doubt inherited the soulful vocals of his father.”

Born on March 12, 1982 in London, UK, Christopher frequently performed with his legendary father on world tours, leaving lasting impressions on international audiences across the globe, including in the territories of: Jamaica, New York City, Italy, Germany, London, Spain and Canada, to name but a few. But, it wasn’t until the fledgling songbird was about 14 years old that he started to realise how groundbreaking his father’s legacy was.

During his learning curve years, Ellis found himself perfecting his song writing talents and passion for music by performing regularly at venues such as the Jazz Café near his home in London, England.

On October 11, 2008, Alton Ellis passed away in London, England. About six days before, the reggae legend handed his musical torch to his youngest son. Ellis confides, “Dad said to me, ‘Christopher, you need to take it up’, and him saying that ignited a fire deep inside of me.” 24 hours after Christopher painfully witnessed the passing of his father, he went into a studio in London and recorded a tribute song to his father, the recording would later be released on the 2009 ‘Old School Young Blood’ reggae dancehall compilation through the U.K. based Peckings Records, which also featured the track ‘Young Hearts’ by Tarrus Riley.

Though coping with his father’s death, Christopher Ellis was finding himself in a good place. His musical inspirations also continued as he absorbed the organic surroundings of Jamaica. Christopher recalls a day that his brother’s childhood friend approached him about going to Hope Road to meet Stephen Marley. The introduction was finally made, and at that fateful meeting on Hope Road, Christopher sang A Capella for the iconic reggae producer. Two days later, Stephen Marley invited Christopher to join him at King Jammy’s studio in Jamaica. The studio session resulted in Marley recording Christopher Ellis’ first single entitled, ‘End of Time’, a moving, soul stirring track featuring beautiful vocal works by Stephen Marley, Christopher Ellis and Jah Cure, inspired by Alton Ellis’ rendition of ‘You Made Me So Happy’.

The magnificent opportunity of working with Stephen Marley and the Marley Family has continued in Miami where Ellis has spent quality time working in the studio on material that is being helmed and produced by the 6-time Grammy award winning artist and mega-producer. To date, Ellis has recorded two singles, including the aforementioned ‘End of Time’ and a rendition of Alton Ellis’ song entitled, ‘Willow Tree’, a sweetly seductive lover’s ballad that showcases Christopher Ellis’ versatile musicality. Released on Marley’s own Ghetto Youths International, Inc. record label, ‘Willow Tree’ is now available on itunes for download.

More recently, Christopher recorded the fresh-sounding single “Don’t Change Your Number,” featuring hard-hitting rhymes from Bay-C of the dancehall super group T.O.K. which has enjoyed strong radio airplay in his native London. The swinging up-tempo track is a departure from the one-drop reggae fare Christopher is best known for, but he’s embracing the creative growth. “It’s always nice when people can’t predict what’s coming,” says Christopher, who recently shot a video for the tune in Jamaica. “Showing versatility is a great thing”.

For the future, Christopher advises fans to expect the unexpected. “If you don’t hear me singing reggae music, don’t worry ‘cause it’s still music. I love One Drop reggae so much, but we’ve been experimenting with different sounds and it’s really sounding good. I have some things to portray to the world. It’s all about fulfilling the mission of extending my father’s legacy. Anything I can add to that legacy is a blessing.”