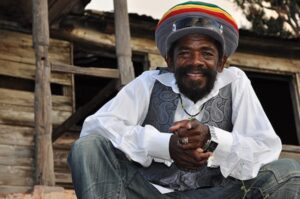 COCO TEA is one of Reggaes most talented and versatile artistes. His smooth, easy-going vocal presentation (pre-recorded or live) have become his trademark, earning him wide international acclaim; with songs like “Lost MY Sonia,” “Tune In” and “Rocking Dolly,” becoming world anthems in Reggae land.

Admired and respected for his fine conscious recordings, COCO TEA is also known for his unwavering generosity and kindness for the less fortunate.

Born Calvin George Scott on September, 3, 1959, in Rocky Point, Clarendon, he was later schooled at the salt Savannah Primary school in Rocky Point and the Bustamante Junior Secondary School in Lionel Town Clarendon.

From the exposure gained by singing on church and school choirs, COCO TEA recorded his first song, “Searching In The Hills,” in 1974. Only Fourteen years old and having other interests, Calvin had no plans of making music his career. “Searching In The Hills,” was far from a financial success. The disappointment was keenly felt by Calvin, and so he took the music business off his mind for a while.

The next five years found COCO TEA first as a Jockey, and then as a Fisherman. It was during this time of fishing that he began structuring his music career. His training grounds were the dancehalls, where he would test his lyrics on the various Sound systems that came to play in his area.

His success in the dancehalls strengthened his purpose and encouraged him to go further, so he began writing songs and training his voice. The final push came when, his first child, was born. His need for a steady livelihood plunged him into music full time.

Two months after an impressive performance at a dancehall in December ‘ 83,’ COCO TEA journeyed to Kingston where he met Henry “Junjo” Lawes. “Who’s The Champion” and his first big hit, “Rocking Dolly,” were the first products from what was to be a successful union. These songs along with “Christmas Is Coming,” and “On Top Of The World,” were all compiled with COCO TEA’S next big hit, “I Lost My Sonia” to produce his first album, by that name (“I Lost My Sonia”).

In 1985 COCO accepted the Rastafarian faith. The conversion was reflected in his music, with songs like “Settle Down,” “Don’t Be Shy,” Too Much Fussing And Fighting” and “I’ve Gotta Love You,” “86 Flood,” “Highest Mountain,” “Tune In,” “Crying Time,” “Must Unite” and “Come Again,” which he recorded for King Jammy’s, on his fourth album titled “Settle Down” (the others being “Mr. COCO TEA and “Come Again”).

The single “Rikers Island,” made it to No.1 in the United States and the U.K. and an album of the same
name, his fifth, was to follow. This album also included the hit single “One Woman Show.”

“Oil Ting”- his most controversial recording, done off the War in the Middle East, was banned in England, (because of contents they claimed had Prong sentiments) while it went to No.1 in America. “Oil Ting” was followed by “No Blood For Oil,” ”What’s Gonna Happen After The War,” and ”Ruling Cowboy.”

COCO TEA’S sixth album, one called “Authorized,” includes the hits ”May Day,” ”One Away Woman,”’Hunted- Wanted.” and Evaluation.” Several other singles have also been released, including ”Bust Outta Hell” and ”Kingston Hot” on the legendary Junjo Lawes Volcano Label.

COCO TEA has been performing all over the world since 1984, with extensive tours to the U.S., Canada, europe the Caribbean and Japan. Locally he remains a regular on all major concerts and has appeared on reggae’s premiere event, Reggae Sunsplash every year since 1987, except in 1989. He singled out his three most
memorable performances to date; his first performance on Sunsplash in 1987, the other, a show in Canada, where he performed for two hors non-stop, and his land mark achievement, a performance in St. Croix, where he performed for 10,000 people in the pouring rain. And on reggae japan splash 1991 where it was said that about 1000 000 were in attendance

COCO TEA earned his stage name, because of his love for …?… you guessed right, hot cocoa (cocoa tea, as it is called in rural Jamaica). Sweet Sweet COCO TEA attributes his inspiration to Jah. His aim was to become a role model, a source of learning and inspiration- like the great Bob Marley, whom he so admires. As
he puts it, “There is a lack of consciousness from what it used to be, it’s (the music) is becoming what it is not be.”

‘If one of my songs can be remembered and or quoted, and be of inspiration or guidance to anyone, then I shall be forever happy with my contribution musically.”

An accomplished songwriter and performer, COCO TEA’S list of No.1 songs both locally and internationally
include:
International
Local
I Lost My Sonia
Who She Love (with Shabba Ranks)
Come Again
Bus Outta Hell
Tune In
Pope Up
Form A Line
Too Young (with Buju Banton)
Eighteen and Over
Good Life
Rocking Dolly
Pirates Anthem
Rikers Island
Oil Ting

His current album ”inna di red” on the roaringlion label is ”now in stores and online @itunas.com distribute by vp records’

COCO TEA’S determination and resilience, to his cause are noteworthy. Messenger, Teacher, Humanitarian,
Entertainer and Reggae vocalist Extraordinaire are titles that fit comfortably and perfectly on this artiste.