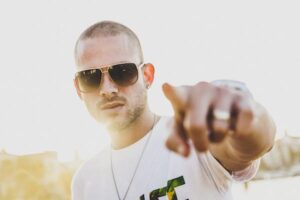 Collie Buddz points his finger at the camera before his set at Shoreline Jam at the Queen Mary, August 31,2014 in Long Beach, CA.

Light It Up, the new record from artist Collie Buddz, is momentous, gigantic and booming! It’s immediately undeniable an awe-struck song complete with an unforgettable sing-along hook, the kind of beats that pound in the chest and a vocal performance that’s as uncommon as it is infectious.

A hit record is probably the only thing that makes Salaam Remi pause his day. Remi, most known as one of the top-selling music producers in the world [Fugees, Usher, Fergie, and Amy Winehouse] and Executive Vice-President at Sony Music knows an irrefutable song when he hears it. After discovering Light It Up, Remi made an offer to Collie Buddz to join his label imprint Louder Than Life, a division of Sony Music Entertainment.

“Salaam knows music. It feels good. I want to reach a certain level with my career and go places I haven’t gone yet. Being with Sony Music definitely helps with that,” Buddz says with some anticipation.

Light It Up, is a new anthem spreading across every college campus and radio stations, but the artist that created the tune has a name that may sound familiar to some music fans. Buddz exploded onto the scene a few years ago when critics and tastemakers alike embraced him – Spin Magazine proclaiming, “Buddz proves the pop rule: Catchiness transcends color.” From Vibe Magazine to Entertainment Weekly, Collie Buddz made quite an impression with music critics.

Produced by Neenyo, a protégé of hit maker J.R. Rotem, Light It Up easily goes from the car to nightclubs all over the world. Collie details his process, “As an artist, I want to expand musically. I’ll always do Reggae. I did Reggae music because I was good at it and that’s what I knew and loved growing up. But at the same time, when I put on my producer hat and I hear a riddim, it might not be in my comfort range, but whatever I hear on the track dictates what I’m going to make. I really only care about making good music. For that to happen, it can’t live in a box.”

Indeed growing up on the island of Bermuda, Reggae music was a formidable influence on a young Collie Buddz. Born Colin Harper in New Orleans, LA to a mother of Bermudian heritage with roots on the island dating back to the 1700s, his father passed away while Collie Buddz was at the tender age of four. At that time, his mother moved the family back home to Bermuda. It wasn’t long before Buddz discovered more than his Bermudian heritage. Introduced to Reggae music by his older brother, Matthew, affectionately just known as “Smokey,” by the tenderfoot age of 12, Colin Harper quickly learned his way around a music studio. It soon became apparent to everyone within earshot of the boy that his voice was unique in a way that lingers long after you’ve heard him. “Back then, I just used to plug headphones into the microphone jack of a tape deck. I’d sing into one of the earpieces and record it on cassette,” Buddz recalls.

Eventually, Smokey relocated to Toronto to pursue an audio engineering degree. His baby brother, as always, tagged along. But Buddz had plans of his own. And, by the age of 19, he was attending Full Sail Academy in Orlando, FL pursuing his own audio engineering degree. Only 13 months later, Buddz had that degree. With dreams of becoming a major music producer, Buddz rejoined his brother in Canada.

As a producer, Buddz was the most comfortable in the studio. But he couldn’t find any artists that could really pull off the sound he desired so Buddz far too often found himself just running back and forth from the vocal booth to the mixing booth as he layered his own vocals for his production work. After a while, it just became easier for him to just do it all by himself. At this juncture, Colin Harper became Collie Buddz.

With his independent spirit guiding his journey, Buddz has traveled as far possible from his little corner of the earth. He’s constantly creating new music and experimenting with it in front of live audiences almost immediately. With support from his team at Mojiza Management and touring and merchandising backing at Ineffable Music, Collie Buddz has toured the world. He’s honed his craft while in support of several tours with artists such as Cypress Hill, Rebelution and Matisyahu. He’s performed in front of thousands at the largest music festivals such as Lollapalooza, Boomtown, Summer Jam and the California Roots Festival. While touring, Buddz still found time to record new material and release original music independently on his own record label, Harper Digital. He’s even managed to launch a new radio station back home in Bermuda (Vibe 103) and become a father.

Armed with a tremendous record, it doesn’t appear that Collie Buddz will soon be finding time to rest.