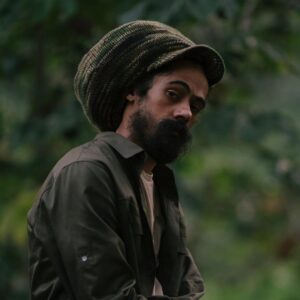 Damian “Jr Gong” Marley, once known as the “The Youngest Veteran” by his fellow artists, is now an elder in the game who’s not afraid to speak his mind out of respect for the music and culture he loves—and for the divine spirit of humanity in all of us. His highly-anticipated 18-track studio album, Stony Hill is set to drop on his birthday, July 21, 2017 – 11 years since his last solo album Welcome To Jamrock. The lyrically profound and largely self-produced Stony Hill maintains the element of hardness from “Jam-Rock” to “Stony,” arriving at a moment when the rhythms of the Caribbean are all over the pop charts—with mostly light-hearted lyrical content. Stony Hill’s timing couldn’t be better.

“No punk can finish where Bob Marley started…we have to stand for the integrity of the music,” Marley says of the inspiration of his album. “It’s good to get some music out there that points to the foundation, the spirituality of it,” says Jr. Gong. “You don’t have to turn into a clown to sell the music,” Damian continues, chastising those whose appeal is based on stunts and gimmicks.
The album Stony Hill takes its title from the Kingston neighborhood where Damian grew up, a relatively well-to-do residential neighborhood just a short drive away from Half Way Tree, the city crossroads that marks the dividing line between uptown and downtown. The young Gong grew up seeing every side of life. “Some people were critics of a song like Jamrock,” he admits. “They say ‘Well, you didn’t come from the ghetto.’ But it’s not about where you come from. Coming from uptown doesn’t mean you can’t care about people who don’t live where you live. Furthermore, Jamaica is so small that nowhere is far.”

“It’s definitely not just a collection of songs,” Damian says of the new album, “where like we just grab a bunch of singles and we’re finished. It’s a body of work that we focused on. But then again it wasn’t too super-premeditated either. It just so happens that this is how I’m feeling right now and what I feel like saying right now.” Though a handful of tracks date all the way back to 2008, Damian says he locked in on the album last October and has been working nonstop since then to complete the project, which ranks as his strongest album to date. So much has changed in his life and in the world since he first began.

“It’s easier to be a critic than to be a visionary,” Damian continues. “It’s easier to criticize the path that we’re on, and much harder to try to carve out a new path to follow. When it come to conscious reggae music, a lot of the songs that you listen to tell you to Bash Babylon! But not a lot of them tell you what to do after you’re finished bashing Babylon. Bashing Babylon—how would I say now?—that don’t make you successful. Where to go after there?”

Jr Gong, the youngest son of Reggae legend Bob Marley, garnered his own place in music history when he became the first ever Reggae artist to win a GRAMMY outside of the “Reggae” category, taking home an award for “Best Urban/Alternative” performance for his title single, “Welcome To Jamrock”. The acclaimed 2005 breakthrough album Welcome To Jamrock, also won a GRAMMY for “Best Reggae” Album. Marley has been shaking up stages all over the world for the past few years, first in collaboration with Nas on their Distant Relatives project, and then when he went on to partner with Skrillex for their groundbreaking track “Make It Bun Dem,” which Rolling Stone called “a monster mash up of dubstep and dancehall.” Damian recently toured for the first time ever in Africa – making stops in Kenya, Durban, Johannesburg and Ethiopia; in addition to his European tour, visiting over 10 countries. This fall, he will hit the road again in the US in support of his new album. For tour dates and more information visit www.damianmarleymusic.com