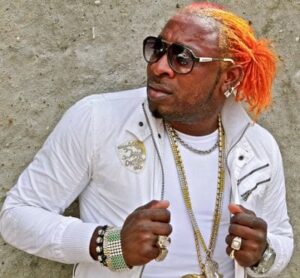 “If you saw me today you are never gonna forget me…my hair, my clothes, my style…I’m crazy man, I’m the Energy God…Father of the Dancehall…” Elephant Man

“A true entertainer is versatile and makes music for the world,” says Elephant Man in his scruffy Jamaican baritone. His boisterous demeanor, quick chatting lyricism and unforgettable stage presence have all helped transform this Seaview Gardens local deejay into an internationally recognized reggae phenomenon. Elephant Man’s music has brought a new innovative flavor to the dancehall. His free-spirited vibration leaves you eager to do nothing less than let loose and party, making it blatantly evident that Ele’s mission is to create energy infused music that everyone can enjoy.

Elephant Man stormed through the doors of dancehall back in 1998 under the wing of Bounty Killer and the Scare Dem Crew (Boom Dandimite, Harry Toddler, Nitty Kutchie and Elephant Man) flexing his creative muscles while managing to successfully brand himself as “Father Elephant,” the self proclaimed Dancehall King. Elephant Man is the responsible mastermind behind reuniting dancehall music with fun, innocent, trouble free dancing, a vital element that’s been absent from the culture and most often replaced by a new wave of artistry who glorify a bad mon, bad mind persona in their records. His pivot album, Good 2 Go (VP), became a worldwide smash back in 2004 with the release of chart topping party tunes like “Signal di Plane”, “Jook Gal” and “Pon di River, Pon di Bank” which snagged him a Source Award for Dancehall/ Reggae Artist of the Year along with a MTV Music Award nomination.   Since then, the hardcore, nonstop Energy God has recorded, radio friendly collaborations with Lil’ Jon on the “Get Low Remix,” R. Kelly on “Reggae Bump Bump,” Pitbull and Daddy Yankee on the “Rah-Rah Remix,” Twista and Youngbloodz on “Jook Gal Remix” and Janet Jackson on “All Nite (Don’t Stop);” performed on stage at the 2004 BET Awards; signed a deal with Diddy’s Bad Boy Records, and received a 2009 Grammy nomination for his Bad Boy/VP release “Let’s Get Physical”. “This album is crazy, I got too much hit songs” says Ele. And with the added musical genius of Wyclef (Five-0), Swizz Beatz (Jump) Rhianna (Throw Your Hands Up), Shaggy and Busta Rhymes (The Way We Roll Remix), Elephant Man does nothing less than deliver a well-balanced, mature, dancehall collectable, something expected from a man whose childhood neighbor and hero was the legendry Shabba Ranks.

“Let’s Get Physical,” the 18-track disc that fuses crazy, sexy, gangta’ party tunes with lyrics that also highlight the social ills and violence plaguing the people of Jamaica, hit stores in April 2008. Ele gets serious on tracks like “You Can Make It” (J. Kennedy) offering hope and refuge to ghetto youth worldwide. “The ghetto teaches you how to be a strong man. You learn in a split second how important it is to make the right moves…making the wrong ones can cost your life,” says Ele, while reminiscing about the struggle, “Elephant Man” born O’Neal Bryan, survived growing up in Kingston Jamaica.

His notorious dancing anthems cascade throughout the record. “Father Elephant,” formerly introduces Ele to the world as the new Dancehall King. “I’m the one who change the dancehall with the dancing…I’m the one that made people Log On, Higher Level, Get Jiggy, Signal Di Plane…I’m the father for that now,” explains an animated Elephant Man, penning the Scoobie Doo dance to this witty high energy song.

Ele chats to the ladies on sexy ballads like “Gayl Bruck” and the albums title track, “Let’s get Physical,” while paying tribute to slain dancehall icon, Bogul, on “Willie Bounce,”(Rupert “Q45” Blake) a fast-paced Energy God rendition of Gloria Gaynor’s “I Will Survive.” On “Ova Di Wall” Ele sings, bad mon run but informers gonna crawl/ bad mon put ya AK over di wall…explaining, “This is for the hardcore dancehall fans, fi di ones who love dancing. When you’re in the dancehall and its getting wild… you’re telling everyone to put them hands in the air but in Jamaica we say “over di wall.” That’s a dancing style where you put ya hands in the air like you’re in the military holding an M16 doing drills.”   “Gangster Rock” (Christopher “Longman” Birch) brings the album a slightly different flavor. While most of Ele’s dancing tunes are jump up, speedy, sweat drenching sing-a-longs, “Gangster Rock” is for the real bad mon who are not dancers and refuse to dance. “I said I’m gonna make everyone of dem dance…so im like ‘everybody fi ya do gangsta’ rock now’…you just lean back like a gangsta’ and do a simple gangsta’ rock,” reaffirming that Elephant Man makes music that the masses can enjoy.

Linking up with Diddy back in 2005, while sharing a dressing room on Usher’s Confessions (both were opening acts), Ele hit the stage with an electrifying performance and Bad Boy’s CEO was sold. “When he saw my performance and what I had he was like ‘yo, Elephant, let’s do this’ and I was ready,” says Bad Boy’s first reggae act. “I been a fan of Bad Boy for the longest time and now I’m Bad Boy for life…”

Never abandoning VP Records, that nurtured and supported Ele from the beginning, Elephant Man also recently released Energy God: The Very of Best Elephant Man, an 18 track album and DVD encapsulates his most brilliant work over the last decade including his recent chart topper “Nuh Linga”, in February 2009.