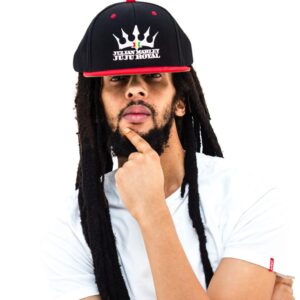 Born in London, England on June 4, 1975, Julian Marley is the son of reggae legend Bob Marley and Barbados-born Lucy Pounder. Growing up as a youth in a musical atmosphere, the Grammy Award Nominated roots-reggae musician, singer-songwriter, producer and humanitarian quickly adopted a musical lifestyle, and at an early age and became a skillful, self-taught musician mastering the bass, drums, guitar and keyboards.

During Julian’s formative years in Jamaica, he began to study under legendary reggae veterans such as Aston “Family Man” Barrett, Carlton Barrett, Earl “Wire” Lindo, Tyrone Downie and Earl “Chinna” Smith, all of whom inspired the then fledgling song-bird. In 1996, Julian released his debut entitled, Lion in the Morning, which launched him into the public eye. The album was a conscious effort and culmination of his musical development to date and reflected Julian’s growing maturity and musical sophistication. Recorded at Tuff Gong studios in Jamaica, Lion in the Morning is Julian’s own testament that clearly reflects his roots and heritage. The record was followed by a successful International tour with The Uprising, which included performances in Jamaica, New York City, Japan, Brazil and Mexico.

In 1998, Julian contributed a vast range of musical elements to singer Lauryn Hill’s Grammy Award winning album, The Miseducation of Lauryn Hill, including playing guitar on the single, “Forgive Them Father”. In 2003, Julian joined his siblings Stephen, Cedella, Damian, and Kymani to contribute a version of the single, ‘Master Blaster’ for Stevie Wonder’s tribute album entitled, Conception: An Interpretation of Stevie Wonder Songs. That same year, Julian also recorded his sophomore effort entitled, A Time and Place at the Lion’s Den in Miami. An organic fusion of rootical reggae and jazz, A Time and Place was produced by his brother Stephen Marley, and the album cemented Julian’s next milestone on his artistic path.

In 2005, along with the Marley family, Julian embarked on a series of ‘Africa Unite’ performances which began in Ethiopia and included Ghana in 2006 and Jamaica in 2008. At the invitation of the Jamaican government, Julian Marley and The Uprising performed during the 2008 Olympic Games in Beijing, China, and celebrated along-side Jamaica’s Gold medal-winning runner, Usain Bolt.

In 2009, Julian Marley’s career rose to new heights with the success of his Grammy Award Nominated release entitled, Awake released on Ghetto Youths / Universal Music Group. The thought-provoking album was co-produced with his brothers Stephen Marley and Damian “Jr. Gong” Marley and recorded at the Lion’s Den in Miami and the Tuff Gong studio’s in Jamaica. Julian’s ‘Awake’ world tour with The Uprising flourished in 2009, and stemmed into a major North American, Caribbean and European run that included the Raggamuffin 2010 tour of Australia and New Zealand. In May 2010, Awake took home the award for ‘Best Album of the Year’ at the International Reggae and World Music Awards (IRAWMA) in New York City. Marley’s tour with The Uprising continually expanded in 2010, and performance dates found Marley circling Europe, and scheduling back to back headlining performances in the UK, Greece and South America.

Julian Marley ranks higher in the consciousness movement of music than most reggae artists recognized today. In the same tradition as his father, Julian is a devout Rastafarian whose music is inspired by life and spirituality. And while Julian has built a formidable reputation by transcending musical genres, we can be sure that all future endeavors that the music visionary embarks on will remain spiritual, moral and with a global mission. Julian notes, “I don’t plan the next step, I just continue on with Jah Works and somehow things seem to just come together naturally that way.”