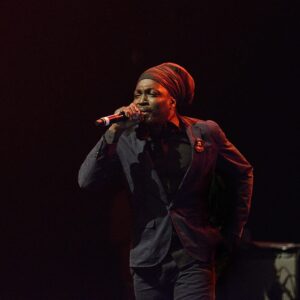 Reggae and Dancehall Artiste Junior Reid born Delroy Reid on June 6, 1963 and grown in the gritty Waterhouse community of Kingston Jamaica where, during the politically turbulent late 1970’s, he recorded his first-ever single “Speak the Truth” at the age of 13 for his friend and mentor, the late Hugh Mundell. The track, released in Jamaica on Augustus Pablo’s Rockers International label, made popular as an import single in the United Kingdom, was followed by “Know Myself” in 1981 on UK label Greensleeves Records. Reid later went on to form his own band, the Voice of Progress, and after a local hit with “Mini-Bus Driver” the group scored local success with an album of the same name.

By the early ’80s, Reid was commissioned by the great Sugar Minott to record a number of tunes on Minott’s Youth Promotion label, enjoying considerable popularity with tracks such as “Human Nature” (produced by Junior Reid), “A1 Lover” (produced by Sugar Minnott), and the evergreen “Foreign Mind”, an uplifting anthem of pride for ghetto youths whom Reid increasingly championed. Junior Reid transferred his talents to King Jammy’s studio where his fast-growing success rose yet another notch. “Boom Shacka Lacka” was his first UK hit and led to another exceptional album, after a number of fine singles which included: “Youthman”, “Bank Clerk”, “Sufferation”, “Give Thanks and Praises” and “Higgler Move”. Reid then launched his label “Jr Productions” with his first single “Settle Down” by Barrington Levy.

1989’s “One Blood” saw him re-established at the forefront of the reggae scene. “One Blood” immediately became an anthem for family and unity in America and around the world. Reid’s vocals have since been used widely in hip hop with more collaborations with international acts than any other reggae/dancehall artiste. Such collaborations include “One Blood Under W” and “Jah World” from The W album by the Wu-Tang Clan, which was released in November 2000. His next collaboration with Guru on the song “Mashing Up the World” on the album Jaz Mattaz. In 2006, he collaborated with West Coast hip hop artist Game on the song “It’s Okay (One Blood)” which samples Reid’s 1989 single “One Blood”. The song hit the top of the billboard chart and was also included in included in the video game Def Jam: Icon for the Xbox 360 and the PlayStation 3. The song was then remixed again and the official remix was released in November 2006 featuring 25 hip-hop artists including The Game.

Reid appeared on the Blackout remix of Mims’ “This Is Why I’m Hot” from his debut album M.I.M.S. (Music Is My Savior). This was one of the more popular remixes in 2007. He did a song with Jim Jones, Max B and Mel Matrix called “What A Gwan”, featuring a sample from Barrington Levy’s Black Roses. Reid is on Fabolous’ album From Nothin’ to Somethin’ on the track “Gangsta Don’t Play” and he has collaborated with Fat Joe on the track “More Money”. He appeared on the remix of Smitty’s song “Died In Your Arms” also featuring Rick Ross and T-Pain. In late 2007 he performed in the “Freedom Concert” in Port Harcourt, Nigeria and also went on to record the remix version of “Free” with De Indispensables, a Nigerian hip hop duo. Reid was also featured on the track “Fire” from San Francisco-based DJ and deep house producer Miguel Migs’ 2007 album Those Things.

In 2007, Reid performed alongside Alicia Keys at the American Music Awards. Reid is featured on a remix version of Alicia Keys’ single “No One”. He also did a song with Lil Wayne called “Ghetto Youths Rock”. In 2008, Reid was featured on Bun B’s song “If It Was Up II Me” off his album II Trill. In 2009 Reid sparred with fellow reggae artiste Jah Cure on “Hot Long Time” and later in 2011 recorded the track “Respect” with French reggae artiste Alborosie. Also in 2011, Junior Reid teamed up with Ludacris, T-Pain, Busta Rhymes, Mavado, Bun B, Game, Twista, Jadakiss, Waka Flocka Flame, Fat Joe, Ace Hood & Birdman in the remix of Dj Khaled’s “Welcome To My Hood”. “Welcome To My Hood” (featuring Rick Ross, Lil Wayne & Plies) is the lead single off Dj Khaled’s 5th studio album We The Best Forever.

In May 2013 Reid performed as a headliner at the Reggae On the Hills festival in Barbados. The festival had over 60,000 people in attendance, the largest crowd in their history. Reid also released a mixtape in 2013 called Kingston Firehouse as a lead up to his album Junior Reid The Living Legend which was released in 2015. In June 2016 Junior Reid performed in the UK for the first time in 10 years shortly after Reid’s brother “Thrilly” died of natural cause months earlier in April 2016. Another of Reid’s brothers, “Grammy” was murdered in Waterhouse many years earlier in 1999. A number of Reid’s sons have followed his musical footsteps namely Andrew and Wada Blood, Yung JR, Juju Reid and Adoney Reid.