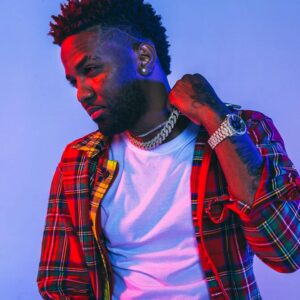 Fans of dancehall music know Konshens as the voice behind many of the biggest bashment anthems of the last decade. His songs like “Gal a Bubble” and “Bruk Off Yuh Back” are absolute essentials of the genre, capable of sending dancers into a frenzy the second they’re played in a party.

But there’s more to Konshens than one genre of music, as recent collaborations with The Chainsmokers, Major Lazer and rappers Rick Rossand Nipsey Hussle attest. With the release of his second album, It Feel Good, Konshens is proving he’s a truly global artist whose talents can’t be boxed in.

Like most dancehall artists, Konshens’ story originates in Kingston, Jamaica. Born Garfield Spence, he spent his early days between the Up Park Camp military base, where his father was stationed in the Jamaica Defense Force, and Sherlock Crescent, a garrison community on the city’s outer fringes. Together with his older brother, Delus, he formed the group Sons of Jah (also known as SoJah), and began releasing music in 2005. The duo’s very first single, “Medz Pon Di Corner,” which dealt with the tensions simmering in their Sherlock Crescent community at the time, became a hit in Japan, leading to a tour of that country and the release of a Japan-only album, also entitled Sons of Jah.

In 2008, Konshens branched out on his own with his first solo single, “Winner,” a blend of dancehall and hip-hop which took a hopeful approach to the financial anxieties many were feeling during the global recession. He continued to build his rep as a thoughtful new voice on the Jamaican music scene with lyrically-rich tracks like “Rasta Imposter” and “The Realest Song.” In 2012, Konshens released his debut solo LP, Mental Maintenance. While the album contained a variety of reggae, hip-hop and dancehall flavors, it was at this time in his career that Konshens came to be celebrated for his “gyal tunes,” waistline-minded anthems known for creating hysteria among female dancers. After setting things off with 2012’s “Gal a Bubble,” he followed with similarly-minded hits like “Stop Sign” and “Gyal Sidung,” cementing his place as di gyal dem deejay.

“From the get go, people misinterpreted the name Konshens and thought it means conscious,”Konshens says, explaining his complex, and sometimes, misunderstood identity. “I always did badman tunes, gyal songs, all aspects [of dancehall]. It took a big gyal song to create this idea of a transition, but I am just an artist approaching however I am feeling on a certain day. There is no limit to what I would say or do, once I am comfortable with it.”

In 2013, Konshens collaborated with female dancehall star J. Capri on “Pull Up To Mi Bumper,”a throwback to ‘90s dancehall styles which became a hit across Europe, leading to more international collaborations like “Policeman” with Dutch EDM star Eva Simons and the official dancehall remix to The Chainsmokers’ Top 10 single “Don’t Let Me Down.”He would score the biggest hit of his career to date in 2016 with “Bruk Off Yuh Back.” That track, which has received over 100 million plays on YouTube, gained even more legs the following year when R&B star Chris Brown added his voice to an official remix.

The “Bruk Off Yuh Back” remix is one of many international collaborations on It Feel Good (or IFG for short), Konshens’ first release through a new joint venture between his Subkonshus Music and San Francisco-based EMPIRE. The 16-track album pairs the “gyal tunes” and bashment anthems Konshens is known for with a more global sound incorporating trap, R&B and other melodic flavors. Featured guests include Rick Ross, Shaggy, Tarrus Rileyand Rvssian. Production comes from a committee of Jamaican and international producers including dancehall maestros Rvssian, Stephen ‘Di Genius’ McGregor and Don Corleon.

“For people who are already fans, they get the old Konshens mixed with the new direction of Konshens,” Konshens says of the long-awaited project. “For new fans, it is a display of one of the best dancehall artists out right now.”

The lead single “Big Belly” is a trap anthem featuring Rick Ross and a rare vocal appearance from Rvssian, known for his production work with Vybz Kartel, Cardi B and Bad Bunny. The reggae ballad “Real Real Love” showcases a more mature, romantic sound for the artist, while “Days of My Life” (featuring Satori) addresses the recent death of his brother, Delus. The album also includes Konshens’ latest dancehall smash “Turn Me On” and “Bassline”a ‘90s-style dancehall jam that’s sure to follow suit.

With It Feel Good available worldwide, expect to hear Konshens everywhere in 2018. Fans can also find him on “Succa Proof,” from L.A. rapper Nipsey Hussle’s Victory Lap LP; alongside Nicky Jam, Farruko and Arcangel on the Rvssian-produced Latin trap anthem “Privado”; and on Major Lazer’s latest EP, Know No Better.

Even while making moves abroad, Konshens is fully focused on elevating the music of Jamaica and bringing dancehall to its rightful prominence within the global music sphere.

“I am trying to bring dancehall back to the glory days — the Sean Paul days, the Shaggy days and the Beenie Man days,” he says. “I am trying to reintroduce dancehall to them from the ground up.”