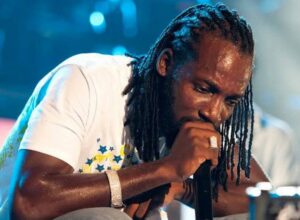 Known to the world as Mavado or more recently “The Gully God”, the singer behind the eerie wails of “Anywayyy!” and “Gangsta for life!” which have dominated the airwaves was born David Constantine Brooks on November 30, 1980 in the micro-ghetto community “Cassava Piece” within Kingston, Jamaica. Before getting his break in the music business, Brooks worked as a barber and his two main influences on the direction of his young life were his grandmother and the music of Bounty Killer. “To tell the truth” he explains, “it was me grandmother that first really bring me in the studio, ‘cause she bring me in the church to sing. She always tell me to sing for her and that really give Mavado the courage to get to love music.” But if the sweet sounds of gospel provided the motivation, it was the gruff voice of Bounty Killer that proved to be the more powerful influence. “As a youth, Sanchez and Wayne Wonder were really my two singers, Sanchez have the voice of an angel. But me and my friend always say ‘Yo, Killer is the wickedest!’ So long as it’s Killer, it’s just my song, trust me!”

Idolization became mentorship when local reggae selector Foota Hype introduced the young singer to his hero. To Mavado’s amazement, “Killer start to show we the ropes” of the music business, introducing him to the Daseca production crew. “Them are the youth which really bust Mavado, them come up with the Anger Management riddim, I sing for it, Killer endorse it and the thing just work.” Indeed, “Real McKoy”–Mavado’s 2004 debut single on the Anger Management riddim—made him an overnight sensation in the Jamaican dancehall and established the blueprint for his future success; a sweetly melodic voice combined with a persona more like a gangsta rapper. Dressed in “full black” and speaking to the harsh reality ghetto youth could understand, but in haunting, otherworldly tones, Mavado carved out a inimitable style somewhere between the angel and the warlord. It was the next tune “Weh Dem a Do” with it’s “fly-ay ay up to the sky” hook over the club-tempo Red Bull & Guinness riddim that brought that voice to the overseas market, and earned him magazine covers like The Fader as well as adds to mainstream stations like New York’s Hot 97 and the #27 position on the Billboard’s Hot R&B/Hip Hop Chart.

The string of successful 45s continued with “Dreamin” but although Mavado’s star rose in synch with his crew the Alliance, including fellow Bounty Killer protégés Daseca and Busy Signal, success did not come without some turbulence. Dramas were played out in the media eye, such as the murder of his Rastafarian father in Switzerland and an incident wherein Mavado was pushed through a plate glass window at the Constant Spring police station, almost losing several fingers on his left hand.

Mavado’s first full-length album, Gangster for Life: the Symphony of David Brooks, was an ambitious opus which followed the whole up and down arc of this life story. The album has remained in the Top 25 Billboard Reggae charts since its debut in July 2007. Opening with his earlier singles that brought him fame, interludes like and “Cassava Piece Radio” weaved the songs into a coherent musical saga. His father’s death was spoken to on the one-drop tune “Sadness,” while “Pon The Gully Side” and “Last Night” documented the singer’s rough upbringing even as they showcased the more angelic side of his gangster gospel. The album’s hot single “Dying,” a version built around a tribute to Tupac rhymes, was redone with the original lines and showed a new sophistication and a lyrical edge as sharp as any rapper’s.

And rappers soon caught on to his unique disposition. Mavado became the most sought after reggae artist to jump on hip hop records. In 2007, he delivered hypnotizing hooks and witty verses for Uncle Murda’s “Informer,” Wyclef Jean’s “Welcome To The East” and Foxy Brown’s “We Are On Fire” off her latest Brooklyn’s Don Diva album. The following year, icon Jay-Z blessed a verse on the remix of Mavado’s popular “On The Rock”. Lil Kim featured Mavado on her hot song “Caribbean Connection,” and 50 Cent’s G-Unit selected Mavado as the only guest feature on their latest album Terminate on Sight.

His ability to voice his experiences and capture the imagination of Jamaican youth every step of the way caught the ears and eyes of a new and broader fan base. He knew exactly how to make his emotional appeal universal.

On the brink of a bright future, there was still trouble ahead for the “Gully God.” In March 2008, accusations from the Jamaican police force were plaguing him once again. Charges were dropped in July 2008, but in the meantime countries like Guyana, St Vincent and Grenadines had banned him from their countries due to his notorious reputation. Also British police shut down his show after receiving “a credible security threat,” one of his entourage members was critically injured at his show in Miami and then the United States denied him entry when he tried to set foot in New York City. With his visa problems still looming, he missed out on a series of shows including arguably one of his most important career opportunities – the chance to perform alongside with hip hop mogul Jay-Z at Madison Square Garden.

However despite controversial attention, there was no stopping Mavado. Just like clockwork the indomitable force kept on ticking to make sure he remained the topic of good conversation. Mavado continued to make generous donations to an organization that helped battered women and for his recently launched charity Connect Jamaica, which donated computers to underprivileged schools across Jamaica.

His music was also crossing new boundaries. The dancehall luminary landed his single “Real McKoy” as the theme song for the fourth Grand Theft Auto trailer entitled “Everyone’s a Rat.” The hit song was also used in the Grand Theft Auto IV in-game radio station, Massive B Sound system. For the U.S presidential campaign, Mavado cleverly flipped his popular “On The Rock” to “We Need Barack” for tycoon Russell Simmons and Green Lantern’s official Barack Obama mixtape. According to the UK’s Guardian, Mavado’s tune was “the most interesting of the compilation’s contributors.” Mavado was also selected for a special Nike 2008 Olympics campaign, where Mavado made an exclusive track “On The Go (Faster Than Bullet)” for Olympic sprinter Asafa Powell’s Train for Speed, a 35-minute interval workout sold on I-Tunes which is coached by the track superstar over a reggae/dancehall soundtrack. Nike also created an exclusive custom sneaker for the dancehall star which represented his neighborhood Cassava Piece.

The newfound celebrity caught the attention of more mainstream media. Rolling Stone Magazine rated Mavado as the “Best Reggae Artist” in their Best of Rock April 2008 issue. Also Billboard Magazine noted the significance of his collaboration with hip hop mogul Jay-Z. “When Jay Z, who has never recorded on a reggae track, rhymed on a remix of singer Mavado’s current hit, On The Rock, it became arguably the greatest endorsement ever given to any dancehall record,” Pat Meschino stated in the article.

Mavado made dancehall an on-screen production in October 2008 when he took home his first major award for Best New Reggae Artist at the prestigious MOBO (Music of Black Origin) ceremony held annually in London.

At the top of 2009, the rising superstar unveils the second chapter of his stirring street narrative Mr Brooks…A Better Tomorrow on VP Records. The talented singjay has crafted his strongest album yet — a bittersweet struggle over the dichotomies in his world — past vs. present, good vs. evil, hope vs. despair, and freedom from strife. It is a true reflection of who Mavado (David Brooks) is today.

This sophomore installment of his latest hits and daring exploits are built on apocalyptic synthesizer progressions to which Mavado chats and sings simplistic yet profound lyrics with strong conviction and ease. His contagious hook and clever outlaw antics from the album’s first single “So Special” (produced by Linton “TJ” White) has already turned this #1 Jamaican and U.K. smash in into a U.S. commercial radio hit remaining on Billboard’s Top 100 Hot R&B/Hip Hop Airplay and Song chart for over a month (peaking at #52).

Mavado has gone from obscurity to ghetto super stardom with his enigmatic gangster façade. Part prophet, part superhero and part fugitive, Mavado is the voice of the streets and represents dancehall for the next generation.