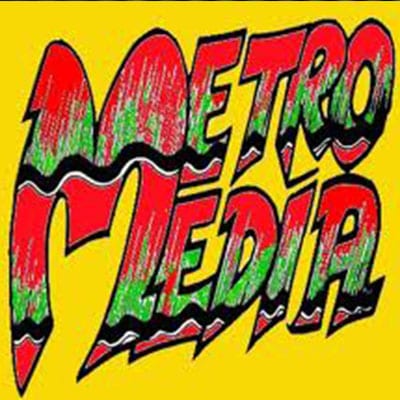 By the late 1970’s Father Metro had purchased more equipment and had acquired selectors whom are now known as some of the greatest resident selectors of the dancehall sound system industry. By the early eighties the sound had grown and they were regularly playing at the main dancehall venues. Their popularity increased with the arrival in 1981 of Peter Metro who’s performances on the microphone were dynamic, filled with humour and lyrical dexterity. He was one of the first, if not the first, to deejay in Spanish to great effect. Metro’s sparring partner on the set at this time was a deejay/singer called Zuzu, with whom he had a big hit in Jamaica with “Join The Army”.
Other popular entertainers for Metromedia around this time included Snack Jack, Massive Dread, Dicky Ranking, Errol Turner Ashman and Sprouty. In these early days Jack was the regular selector but this changed in 1983 and a replacement was found when Peter Metro met Sky Juice who’d worked previously with Black Zodiac sound. He started a long association with Metromedia’s as selector, which continues to this day.
By the mid 1980’s Metromedia Sound System was receiving international recognition and in demand performances. A visit to England in 1984 saw Peter Metro along with Josey Wales, Sister Verna and Sister Katy rocking the London crowds. Back in Jamaica Metromedia were regulars in the soundclash arena with the core of Peter Metro as their main lyrical weapon. Danny Dread a veteran deejay from the late seventies on Stereophonic and later Black Zodiac, became a feature of Metro sessions with his Brigadier Jerry influenced style of cultural chat.
After returning home in 1986, The Great Peter Metro introduced a new selector by the name of Sky Juice to the sound. At a dance dubbed “Return of Metromedia” in StanPipe ,the new selector’s debut was an immediate success as he continues to be the international champion selector. Sky Juice has been the trend setter as he was the first to play a Christian tune, take his shirt off and show his big belly, which he is now famous for as the “Big Belly” Sky Juice as he performs for thousands of people. He had also been the only Selector to date to be featured in an international box office hit movie. The movie Shottas, which starred some of the Caribbean’s internationally known superstars and celebrity artist. Sky Juice’s brief roll as the “DeeJay” at the infamous Club Asylum in Jamaica, made a major impact with his connection to the American culture who love the Jamaican culture and music. Currently he is known as an International Celebrity Selector and performer, whom is highly respected as the Veteran Selector “Big Belly” Sky Juice. His in demand performance is internationally booked practically every weekend
Around the late 80’s Father Metro began expanding the sound, he added the ”original” crew Ashman, Chicken Chest, Wayne Wonder, Doctor C, and Danny Dread, Tonto Metro, Cutty Ranks and many more year after year, which proved to be the right formula for making Metromedia, one of the most popular sound systems in Jamaica, as the rest of the world paid close attention.
During the 90’s the dancehall sound system industry began to change from the once rub-a-dub-style (live deejays) to dub plates or specials (juggling music). Metromedia started playing at venues such as House of Leo and Chelsea Jerk center, alongside sounds like Stone Love, Inner City, Afrique and Black Prince. To stay competitive in the new market Father Metro added members Webber, Oliver, Jugs B and Scratchie to become part of the Metromedia Sound System.
Today, Metromedia Sound System celebrates 30years in the Reggae-dancehall Sound System industry with The Veteran Selector Sky Juice, Selector Oliver Metro, Unruly Scully Metro and Deejay Platinum Metro, earning them the Title “The Year to Year Sound”. The passion, dedication, and hard work the sound has played in each and every musical selection of dub-plates, specials and every now and again a rub-a-dub style ,has maintained their in demand performance at sell out arenas and venues all over the world. Metromedia Sound System has performed in Arizona, New York, Washington D.C., Florida, Canada, Atlanta already within the past six months of the current 2012 calendar year and has bookings for many more U.S cities, in addition to the International Dancehall Sound System continued demand in Japan, Europe, and at home.