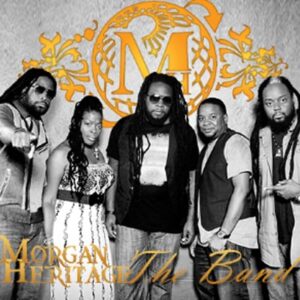 Nearly two decades and ten albums later, the mission has come full circle for Morgan Heritage. Globally known as the “Royal Family of Reggae,” and now today being dubbed as the “Rolling Stones of Reggae” (in large part due to the act’s electric stage shows), Morgan Heritage has established themselves as the premiere live group on the reggae circuit. From an extraordinarily talented teen quintet to one of contemporary reggae’s most powerful forces, Peetah Morgan (vocals), Una Morgan (keyboard/vocals), Roy “Gramps” Morgan (keyboard/vocals), Nakhamyah “Lukes” Morgan (rhythm guitar) and Memmalatel “Mr. Mojo” Morgan (percussion/vocals) are back with Here Come The Kings —the collective’s first musical arrangement in five years. The band’s latest studio album on VP Records will “stimulate the minds of the people and let them know what we’ve created, it’s real,” proclaims Peetah Morgan, the group’s lead vocalist. Prepare for the revolution.

After respective solo careers and music ventures of their own over the last five years, Morgan Heritage returns this spring with their groundbreaking album Here Come The Kings. Lyrically, Here Come The Kings is a refresher course for culture music fans, staying true to Morgan Heritage’s authentic Rockaz style, with brilliant instrumentation and empowering lyrics. However, collaborations with ingenious young blood producers like Lamar Brown (Notice Productions), Shane C. Brown (Juke Boxx Productions) and multiple Grammy nominee, Jason “J-Vibe” Farmer, lead the band to explore new sounds that successfully fuse roots, r&b, and a hint of dancehall, evident on cuts like “Perfect Love Song” and “The Girl is Mine.”

“Roots Reggae is alive and well outside of the island of Jamaica,” Gramps passionately declares, as he expounds on the band’s continued commitment to heal the world through music. “It’s not about changing the message,” which unfailingly has been one of love, dignity, respect, and praising Jah, “but delivering the message to a new generation,” a population that the tight-knit tribe believes has strayed away from the island’s rich culture. “Shabba, Shaggy, these people captivated foreign markets because they were different,” explains Peetah, “but still 100% Jamaican.” “Reggae artists need to realize that what we do is precious. We must value what we have because the public wants us for who we are.”

“We’re a lot more confident and mature than what you heard 5 years ago,” explains Peetah. He applauds the album’s catchy hooks, impressive features and infectious riddims. “The musicality of this project is attractive to the young generation while maintaining the uplifting content that we’re known for,” he adds.

The new album is co-produced by Morgan Heritage, alongside some of reggae’s most innovative talents, including: Linton White (“Perfect Love Song”), Shane Brown (“The Return”), Jason Farmer (“The Girl is Mine”) and Donovan “Don Corleon” Bennett (“Call to Me”). Dancehall phenom Busy Signal lays his indistinguishable vocals on ladies anthem “Loved Stoned,” where a man is telling a woman, “you got me so high, I’m in the cosmos, I’m literally stoned on your love,” Peetah says. “It’s a real heavy love song.” “Stand Up” is incontestably the records’ anthem track, where Peetah commands on the hook, “Stand Up, Stand Up, Stand Up brothers and sisters/ And always remember how Jah mek ya.” “ ‘Stand Up’ is essentially saying know yourself and don’t sell out yourself or your culture to be like someone else or accepted by a certain sect in society,” explains Peetah. “Man Has Forgotten” is backed by a strong melody, punctuated with a bombastic opening, “Come in like dem na memba we seh Heritage fi life.”On “The Girl is Mine” cover, the Morgans stay true to Michael Jackson and Paul McCartney’s original, yet bring reggae to the tune, mid-song, replacing Paul and Michael’s conversation with a singjay verse. http://morganheritagemusic.com/