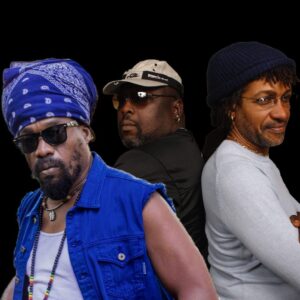 For thirty years, Mykal Rose has been recording and performing his brand of militant, hardcore Jamaican reggae to the delight of fans around the world. As a solo artist, with Black Uhuru, and back as a solo artist, the “Ruff” Rose has achieved great success throughout his career, even as different Jamaican musical styles have phased in and out of popularity.

Worldwide, Mykal Rose is a household name. He is one of the top reggae artists in the world. Mykal is an exceptionally talented vocalist and performer. He has an original style and sound that was quickly embraced all over. Mykal is the favored voice of Black Uhuru, with his Waterhouse slurs, effective songwriting, militant dancing and vocals.

Mykal’s latest album release is called Tragedy of Rome. This album was produced and voiced in Europe. The album before that released in 2016 was called Rasta State. Mykal has been a top artist for many years since his rise singing lead vocals with Black Uhuru. Mykal was the lead singer on Anthem, the Black Uhuru album that won the first reggae Grammy. He has recently been releasing alot of new music.

In May 2016 Michael released Sidewalk Steppa produced by Foreign Key Records. A single of Sidewalk Steppa,was also released at the same time. He also put out a popular single in collaboration with Melloquence and Cutty Ranks called Hot Water. Hot Water was produced by Pascal who is based in Germany. He also released a single collaboration with Al Barose called Want the Herb. Mykal Rose is staying current releasing multiple singles and albums. He has two more albums in the pipeline close to completion.

July 2017 Mykal headlined Reggae On The Mountain in Los Angeles backed by the legendary Sly and Robbie who recorded many of his greatest hits with Black Uhuru. They gave the audiences the true original Black Uhuru sound. Mykal Rose continues to headline many of the best reggae festivals in the world and he has been touring North America and Europe steadily. Early September, 2017 Mykal Rose with Sly & Robbie headlined a major international festival in Argentina.

Perhaps his highest profile recognition came in 1984, when Michael Rose and the other Black Uhuru members (Duckie Simpson, Puma Jones, Sly Dunbar, and Robbie Shakespeare) won reggae’s first Grammy award for the album, Anthem. But the story doesn’t begin with Black Uhuru. In 1976, Michael Rose was already a seasoned performer, having honed his skills by performing on Jamaica’s hotel circuit. When an early incarnation of Black Uhuru (Ducky Simpson and Errol Nelson) approached Michael to join the group, he already had several solo singles to his credit. These include the original “Guess Who’s Coming To Dinner” and “Clap the Barber,” both recorded for producer Niney The Observer, and “Running Around” for Winston Campbell.

Black Uhuru’s first full length album was released in 1977 and called Love Crisis. This was produced by King Jammy (then Prince Jammy), and the big hit of the album was “I Love King Selassie.” But it was not until the Showcase album was released in 1980 with a new lineup of Michael Rose, Duckie Simpson, and Puma Jones that Black Uhuru reached their creative peak. Heartbeat reissued the set on CD (Guess Who’s Coming To Dinner, HB 18), which includes the massive 12″ singles “Shine Eye Gal,” “General Penitentiary,” “Plastic Smile,” and “Guess Who’s Coming To Dinner.” At the forefront of the recordings and live shows was the charismatic Mykal Rose who had incredible stage presence and a vocal style all his own. So popular was his trademark sound that singers like Don Carlos, Junior Reid, Yami Bolo , and others embraced it as the “Waterhouse” sound.

Throughout the first half of the 1980s, Black Uhuru continued their success with albums on Island Records-Sinsemilla, Red, Chill Out, and Anthem, along with compilations, dub albums, and live albums. They became the best-known reggae act since Bob Marley, and won the first reggae Grammy for Anthem in 1984. Even today, Island continues to capitalize on the group’s success by re-compiling and re-releasing the group’s Island years material.

With lead singer Mykal Rose seemingly at the top of his game, he parted ways with Black Uhuru, with the intention of redefining his musical direction as a solo artist. In the early 1990s, Mykal Rose suddenly appeared on the scene with new material including Jamaican singles produced by Sly & Robbie (“Monkey Business,” “Visit Them,” “One a We Two a We”), and three albums (Proud, Bonanza, and King of General) released in Japan.

As a solo artist, Mykal regularly tours the U.S. and Europe, and has maintained his Jamaican fan base with hit singles on the island and abroad. He is a modern roots singer who fits perfectly into today’s scene. With a glorious past and a wide-open future, Mykal Rose is truly a reggae superstar.