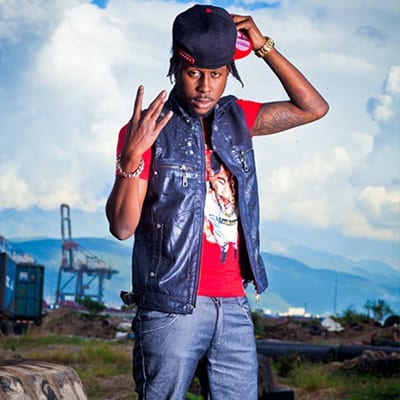 Popcaan is a Jamaican dancehall artist currently signed to Mixpak Records. In 2007, Popcaan approached Vybz Kartel at a local jam called ‘My Scheme’ where Kartel recruited the young deejay to his Portmore Empire, becoming both a producer and mentor. Besides showing Poppy the ropes of the music game, Kartel took him on major shows like Sting and Reggae Sumfest.

Popcaan began making music for Adidjaheim Productions with then in-house producer NotNice, the first person to voice him professionally. He got off to a strong start with “Gal Wine” on the Gal Farm riddim, following up with hits including “It Nuh Work So,” “Jah Jah Protect Me,” “Gangsta City,” “Dream,” “Gangsta City Part Second,” and “Hot Grabba.”

Popcaan’s breakthrough came in 2010 with “Clarks,” a collaboration with Kartel. The song achieved international success, causing a worldwide spike in sales of the British shoe. In 2011, Popcaan received the Excellence in Music and Entertainment (EME) Award for ‘Best New Artist’, and ‘Collaboration of the Year’ for “Clarks,” which also won ‘Song of the Year – Dancehall’.

Popcaan was also featured in The New York Times speaking on the growing impact of “Only Man She Want.”

At the Youth View Awards, Popcaan stepped away with three awards: ‘Favourite Summer Song’ and ‘Local Chart topping song of the year’ for “Ravin”, and of course, ‘Young, Hot and Hype Male.’

Popcaan has been touring extensively since, in Europe, Canada, and the Caribbean and South American region. While in Canada, Popcaan connected with Canadian rapper Drake, who has publicly expressed his admiration.[7] In 2013, Popcaan released the video for “Unruly Rave,” which was shot in Toronto and directed by October’s Very Own label head Niko.

In 2012, Popcaan was featured on Pusha T’s song “Blocka.” His voice was then sampled by Kanye West on Yeezus in 2013.

In 2014, Popcaan signed to Mixpak Records for a multi-album deal. His debut album, Where We Come From, was released on Mixpak on 10 June 2014. The project was executive-produced by Dre Skull. The first single from the album, “Everything Nice”, was produced by Dubbel Dutch and released on 1 October 2013. It entered the Billboard Top Reggae Albums chart at number 2, and the video crossed 5 million views on YouTube.

In June 2014, Popcaan first appeared on the cover of The Fader in its 92nd issue. He featured on Melissa Steel’s “Kisses for Breakfast” single, which was a top ten hit in the UK in August 2014.

In September 2014 he was nominated for a MOBO Award in the Best Reggae Act category.