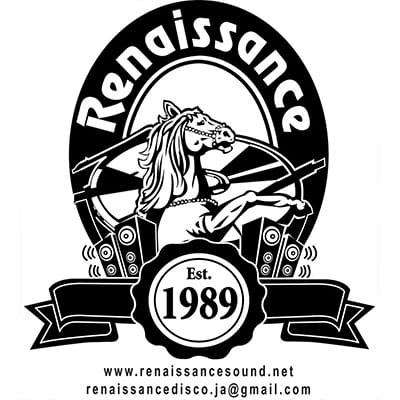 Worldwide play outs, an extensive collection of original remixes, and noted as one of the most recognizable sound systems in entertainment, Renaissance Disco is celebrating their 22nd year in the industry.

Founded in Kingston, Jamaica in 1989 by CEO/selector Delano Thomas, manager Avery Leach, and Devon Simms, this creative team of over ten deejays, selectors, and emcees has dedicated over two decades of tireless work to establish themselves as the official ‘Ministers of the Music’.

Renaissance has progressed from borrowed trucks, mediocre sound equipment, and self set-ups at events to creating an honorable empire—owning their own vehicles, employing a staff and technical work force, and boasting the latest and most competitive sound technology and equipment on the market.

Veteran members Delano, Andre ‘Dr. Dre’ Saunders, Tarik ‘Jazzy T’ Thompson, Michael ‘Mykie E’ Edwards, Orville ‘DJ Pepsi’ Spence, and Ryan ‘DJ Smoke’ Williams have spent many years building and strengthening the Renaissance family. Recently, they’ve welcomed a host of new musical talents to the sound. The versatility and energy of the new members combined with the skill and knowledge of the veterans revitalize the party scene in any country. The addition of this young talent to the family will enhance the Renaissance legacy, and ensure the music remains for generations to come.

Renaissance is known to be the ultimate crowd-pleaser, delivering old and new dancehall and reggae fused with hip hop, accompanied by original and live remixes and impressive dubplates. With an infinite number of accomplishments held to the Renaissance name, a breakthrough moment was producing international artistes’ Sean Paul’s single, ‘We Be Burning’ that rocketed to #6 on The Billboard Charts. Over the years the sound has worked with popular artistes across many genres including dancehall’s Bounty Killa, Beenie Man, Vybz Kartel, Spragga Benz, Shaggy, and Serani, hip hop’s Sean Kingston, Eve, DJ Khalid, and Swiss Beats, and soca’s Machel Montano and Destra, to name a few. Renaissance’s unique capability to captivate their audiences with each set comes from not limiting themselves, and always pushing the boundaries of music to create addictive party experiences.

Having toured the U.S.A., Canada, Belize, Japan, France, the United Kingdom, Germany, and various countries throughout the Caribbean, Renaissance is still the most sought-after sound to host any event. Renaissance’s two signature parties are the Renaissance Anniversary held annually in both Kingston, JA and Miami, FL, and the Renaissance Christmas Eve ‘All White’ party. Along with these recurring events, they are well known for hot and much-anticipated play outs year after year at Frenchmen, Beach Jouvert, ATI & Dream Weekend in Jamaica, as well as Stages, and the annual Jazzy T Birthday Bash in Miami.

Three key motivators that contribute to the success of the sound include enjoyment, sweat, and inspiration. Renaissance guarantees party patrons will enjoy multiple “ear-gasms” throughout any event, dance so they sweat enough to drench their attire, and that the positive vibes of the party will inspire them. Renaissance believes that the ladies set the vibes for any event, whether it be day or night, and make a point to keep them involved and always dancing.

More motivated than ever to keep the sound at the top, Renaissance Disco continues to offer premium fulfillment through music and parties. Embracing their world-renowned title as pioneers in sound, and ever thankful to their supporters, fans, and friends, the Renaissance family remains united through both their achievements and adversities, proving to be ‘Uptown’s Finest.