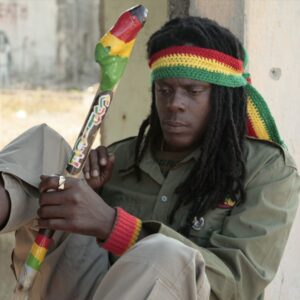 Most reggae fans became acquainted with Richie Spice in 2004 when his single “Earth A Run Red” began its ascent on the charts, first in Jamaica, then internationally, ultimately emerging as one of the year’s biggest hits despite being more than four years old! “Earth A Run Red” was originally featured on Spice’s debut album Universal released by the Cambridge, Massachusetts based label Heartbeat Records in 2000. At that time, Spice was a lone reggae soldier armed with an arsenal of well crafted lyrically uplifting tunes, but without supporting troops, he found it difficult to advance towards the professional frontline. “The songs were there but they weren’t getting any promotion,” Spice recalls, “and with just me going out there singing them, it was like one man against the world.”

In early 2004 Spice signed with 5th Element, a Kingston based management company/record label and they began a vigorous promotional campaign for “Earth A Run Red” in Jamaica, which resulted in the song’s steady rotation on the airwaves and` in the dancehalls. A subsequent video brought even greater visibility to Spice’s career and it wasn’t long before he became one of the most sought after artists for stage shows across the island. Additional hit tunes including the ominous “Folly Living (Blood Again)”, the haunting “Ghetto Girl” and the resounding hymn to herb “Marijuana” were featured on Spice’s debut album for 5th Element Records “Spice In Your Life” which earned unanimous critical praise. The Los Angeles Times broadened the accolades, citing it as one of the year’s ten best albums of any musical genre and in Jamaica, The Observer newspaper honored Spice as artist and vocalist of the year.

Spice’s career has continued to soar as a result of his enthralling live performances (Billboard Magazine ranked him among the top six performers at Reggae Sunsplash 2006) and a succession of hits that have resided in the upper tiers of the reggae charts. As a means of expanding Spice’s international fan base, he joined forces with VP Records where they cooperatively released the ongoing series of Spice’s albums “In The Streets to Africa” 2007 with his romantic boom shot ‘Brown Skin’, “Gideon Boot” 2008, with Bobby ‘Digital’ Dixen from Brickwall Music, which featured chart topping hits like ‘World Is a Cycle’, Let’s Go alongside German Reggae Icon ‘Gentleman’, a continuation of his previously herb anthem Marijuana:‘Wrap Up A Draw’ and ‘Plane Land’.

Since 2004 Spice has become one of reggae’s most in demand talents and the recipient of numerous awards and accolades. He received the Most Cultural Artist Award at the 13th annual South Florida Reggae Soca Awards in 2005; he was voted and received the Male Singer/Singjay of the Year at Jamaica’s IRIE FM Awards in 2007& 2008 and following his performance at the first annual “Black My Story” concert held in Kingston on Feb. 2, 2008 Spice was honored for his positive musical contributions. His 2004 album “Spice in Your Life” was listed as the year’s best reggae release by the New York Times; “In the Streets To Africa”, reached number 6 on the Billboard Reggae chart and one of the album’s biggest hits “Youth Dem Cold” peaked at number 59 on the Billboard Top 100 Singles Chart and ranked at number 29 on Vibe Magazine’s Best 44 songs of 2007. “Gideon Boot” debuted at no. 1 on the Billboard Reggae chart, in May 2008.

Spice’s appealing brand of roots reggae is characterized by smoothly crooned, impassioned vocals that lovingly caresses, or just as convincingly, delivers the militancy of a righteous rebel warrior, or the aura of ancestral mysticism that defines. Guided by the principles of his Rastafarian way of life, Spice’s lyrics rail against injustices and the plight of the oppressed, implore assistance for the youth and extend maximum respect to the ladies. “My responsibility is to use the talent that God gave me as an instrument to uplift people who are facing the struggle worldwide and let them feel happy in themselves,” Spice explains. “It is all about righteousness, and endorsing the love of the people, good over evil and life over death.”

Born Richell Bonner in the Kingston, Jamaica suburb of St. Andrew, Richie Spice hails from a musical family that includes his older brother Pliers (from the deejay/singer duo Chaka Demus and Pliers of “Murder She Wrote” fame) and singer Spanner Banner (best known for his mid 90s hit “Life Goes On”). It was Spanner Banner who initially brought Spice to the recording studio; although the hopeful singer didn’t get the opportunity to record, it opened his eyes to the proficiency that is required to succeed in the reggae industry. “It was a strong learning experience,” Spice recalls. “At that time I tried to record but I was never really ready so I couldn’t manage it. But it showed me that there is a lot of work to be done so just do the necessary things until you reach that space where you are supposed to be.”

Spice took a significant step towards getting where he is supposed to be when he met veteran producer Clive Hunt. Hunt produced his first song, the funky reggae jam “Living Ain’t Easy” and his breakthrough single, the engaging lovers rock tune “Grooving My Girl” still one of the most popular songs in his hit filled repertoire; both songs were included on “Universal”, which provided Spice with his initial international exposure.
Spice continues recording and performing on various stage shows but without label support, he finds it difficult to penetrate the heavily saturated reggae/dancehall market. However, his career path has taken a positive turn on his own now, after he parted company with 5th Element Records. “It is rare that you find someone with Richie’s extraordinary talent, writing ability, humility and discipline,” a comment usually expressed by fan and interviewers worldwide. Spice has a lot to say through his music and with proper guidance and labeling there is no limit to the vast possibilities that await him.

As recent as 2011, Spice released his 5th studio album, ‘Book of Job’, distributed by VP Records, which peaked between #1 and #4 on the Billboard Reggae Charts for a period of 6 months, from the date of release. It was rated as the most digitally sold Reggae album for 2011, by I Tunes and The New York Times. The album still blasts, popular hits such as Black Woman, produced by Raging Fyah, Yap Yap, produced by Lenky Marsden, Legal, produced by Richie Spice, New Day, which held down the #1 spot in Kenya and Grenada, for a period of 3 months in the mentioned year of release.

Richie has been touring extensively since his ‘Gideon Boot’ Album release of 2008. He is awaited every year to date, from 2008, September – October, in the West and North West USA for his 6-8 weeks appearances in various Theatres, Popular Clubs and Harvest Festivals. He has embarked on mini tours of Australia, Africa and The French Caribbean
and has been amazed to find that even though normal communication requires translation, musical communication is fluent and understood no matter the song sung from his hit filled catalogue.

October 2012, Richie Spice’s latest production, his personal baby, ‘Soothing Sounds Acoustic’ album, was released. “Everywhere in the world I trod, fans and media have always asked what am I really saying, my accent is different, and even though they can sing along, they haven’t quite grasped the words, so I decided the design my next production for the people, Acoustic style”, says Richie Spice.
‘Soothing Sounds Acoustic’, distributed by Tads International, has garnered a household name for itself, such like Richie Spice. The songs remixed on the album, is more the persona of the man behind the music.

Throughout the end of 2012 to present, Mr. Spice has been busy, bringing the one message to all class, race, gender and creed, ‘rationality to every situation, for survival, and equal rights and justice to all, while preparing his next full studio production, slated to be released this 2015. He has graced the stages, of Rebel Salute 2015, ‘Redemption Live’, the Digicel Bob Marley Birthday event 2015, both in which he was highlighted as one of the best performances for the nights, respectively.

“So I give thanks to the Almighty because this is what I have been working towards.” “Artistes that do different types of songs might make it faster, but those songs fade out quicker; righteous songs will always stand predominant.”