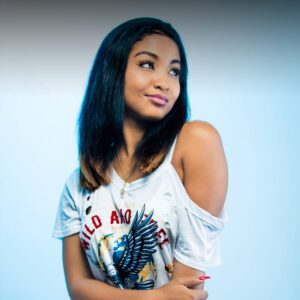 Recording Artiste Shenseea,born Chinsea Lee on October 1, 1996 in the parish of Mandeville is a Deejay and Singer, who prides herself on musical individuality.

Shenseea’s upbringing was mostly done by her aunt, as her parents were not around during the younger stages of her life. Thoughborn in Mandeville, Shenseeaspent the first four years of her life in Saint Elizabeth, as that is where her family resided before she was moved to Kingston.

As her family planted their roots in the Jamaican capital,Kingston, she attended the Hope Valley Experimental School and Mona HighSchool, before being accepted into Exed Community College, where she majored in Entertainment Management. Financial strains saw Shenseea taking leave from school and it was duringthat time that Shenseea became pregnant. While away from school she began doing covers of popular songs from the likes of Beyonce, Rihanna, Ed Sheeran, Sam Smith and more.

A social media follower suggested that she doa recording of a song she wrote and although fearful of her ability to compose a song, Shenseea dug deep and overcame her fear and wrote what would have been her first song and released it to her Facebook followers.

An instant hit, the video went Viral with over 85,000 views in one week. It also garnered attention for her from the likes of Dancehall Icon Beenie Man. It was then that Shenseea, who was always a lover of music, having started out in church and at talent shows at school, realized that her dream of being a recording artiste could materialize.

Shenseea’s musical influences includes, Nicki Minaj, Alkaline, Vybz Kartel and Spice, as she looks up to these performers for their fashion sense, exclusivity, lyrical content and stage performance respectively.

She now calls Romeich Entertainment home and following the release of her hit single ‘Jiggle’, Shenseea has gone on to release a number of tracks and collaborations with the likes ofSean Paul, Jahmiel, Trinidad upcoming star Nailah, Konshens and new international sensation King Kosa aswell as her labelmate Ding Dong.

It was however the collaboration with Dancehall star Vybz Kartel titled ‘Loodi’ which catapulted her to new heights. The single also won a Youth View Award for Favourite collaboration of 2016. She also won two awards for ‘Young Hot and Hype Female of the Year and Favourite Breakout Celeb of the year.As for solo work, Shenseea has dominated the dancehall scene with a myriad of singles including ‘Wine’ for Good Good Productions, ‘Nuttin Dem Nuh Have Ova Mi’ for Dj Frass, aswell as ‘Dynamite’ and ‘Time From You’ from Dunwell and Ja Productions respectively.

Already she has graced a number of popular stageshows, including the biggest Reggae and Dancehall show on earth, Reggae Sumfest, while her touring itinerary continues to expand. Already she has fulfilled performance duties in Europe, Canada, various states in the US and has also made her presence felt in a number of Caribbean territories. The Dancehall Princess has kept her promise to continue propelling to new and higher heights and her work continues to speak for itself.

“Every artiste follows the crowd……..I fit in everywhere, can perform for anyone, there are no rules in music, I write what I want, don’t stick to one topic….. I’m unpredictable” -Shenseea