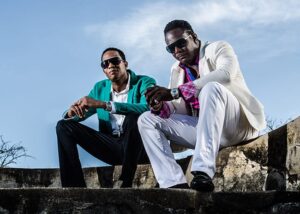 Tanto Metro and Devonte, a major pioneering force of the dancehall movement, has been creating hits for over a decade now. In the late ’90s, they were able to pave the way for many reggae artistes. They tapped into the international mainstream markets during a time when it was unheard of for a Jamaican artiste to reach the charts outside of their home country. Tanto and Devonte’s instant chemistry and talent led them beyond Jamaica and into the U.S. Top 40 Billboard chart not once, but twice. Their first hit, “Everyone Falls in Love,” swept up several major awards in 1998 including the Tamika and South Florida Reggae Soca Awards. The single hit the top 40 R&B and pop U.S. billboard charts and aired on radio throughout the globe. The subsequent album, bearing the same name was released by Sony Epic records in 1999; it featured a number of body-moving tracks like “Say Whoee” and “She Gone.”
Following up on the strength of their debut album, Tanto Metro and Devonte came out with their second release The Beat Goes On in 2001. The album contained the hit single “Give It to Her” that provoked the same contagious vibe and spread throughout the Jamaican and U.S. dancehalls, as well as mainstream pop culture. With “Give It to
Her” in such heavy rotation and rampant demand, the duo performed alongside acts, like Mariah Carey to a capacity crowd for the Top 40 Powerhouse Z100’s 20th birthday bash at the Giants stadium. Their impressive catalogue of material was matched by the scope of their touring; fans in the USA, Canada, the Caribbean, Europe and Japan have all reveled in their energetic performances.
Musically Inclined was the group’s third release on VP Records in March 2006, with the single “Good or Bad Times” along with many other solid tracks. It included collaborations with Morgan Heritage on the upbeat “Time to Party,” Courtney Melody on “Cross the Border,” and Lady Ru on “The Only One.” Also included in the set are the dancehall standards, “Hey Girl” and “Burn,” which have kept the DJ and singer in the mix since the release of their last album and the hit single “I’ve Got News for You,” produced by Ryan Leslie, a Bad Boy Entertainment affiliate.
Since then the duo has released singles such as “My Song” and “Rub Her Down”, which has enjoyed heavy rotation in the U.S. and Caribbean. “Are you Ready” produced by Dimmie Joe Muzik and “Already Know” has found a niche fan base and continues to wow the industry. Even though the two have experienced immense success as a team, both have enjoyed their own popularity as solo artists.

Tanto Metro, In 1982, Tanto’s mentor, Peter Metro, introduced him to Jimmy Metro, owner of the Metro Media sound system. Tanto (Mark Wolfe) started performing with the sound in and around Kingston. His parents, particularly his father, a policeman, were not supportive of their son being in the dancehall. However, with time, both his father and mother came to accept that his destiny as an entertainer had been decided. Tanto’s first single, “We Are Professional” was produced by another deejay, Jah Thomas. It was released in 1986. Tanto met Patrick Roberts, of Shocking Vibes Production, with whom he has maintained a long and prosperous relationship. Their  collaboration led to the release of additional singles, “Tink Mi Did Dead” and his first hit “Stop It,” an anti-drug anthem. In 2006, Tanto Metro released a single with Leon & the People entitled “Second That Emotion,” and made a guest performance at the Aids Walk Day post-walk concert in Central Park New York. The benefit raised over six million dollars in funds, which was the highest ever, raised.

Devonte copped his first major performance at Ghetto Splash ’96’, a free concert in Kingston, attracting thousands of hardcore dancehall fans. He also went on to perform at major music festivals, such as Reggae Sumfest in Montego Bay. “When on stage, I like to give the crowd what they want,” he declared. Born Wayne Passley, Devonte grew up in Rockfort, Kingston with his parents, four sisters and a brother. Young Wayne was influenced by both his mother’s beautiful singing voice and the music of Michael Jackson and Beres Hammond. While still attending Excelsior High School, Devonte started his musical odyssey on a sound system. Since grade 8, Devonte has been a featured performer on Sky Creation Disco, operated by his long time friend, Kyle Hindman. His first recording was a cover, To Love A Stranger for King Jammy’s in 1993, Anthony CD Kelly has played a pivotal role in the advancement of his career. Devonte recorded for Madhouse and Penthouse respectively. His first hit came following his introduction to Patrick Roberts. Roberts, impressed with Devonte’s talents, released the smash track, “Bashment Sitt’n.” Devonte started his own label in October 2005 and produced the “Lucky Coin Riddim featuring several singles by Mr. Easy, TOK, Chico, Mr. Peppa and Zumjay among others. In addition, he has since released such singles as “Not another day” which was featured on their Musically Inclined album; Right by Your Side” and “Rain” which made its way on the Toronto Top Ten Reggae/Dancehall singles chart. Devonte has also produced singles for Kirk Davis, Tanya Mullings, and Beenie Man.

Together, Tanto Metro and Devonte continue to make an impact on fans and the history of dancehall. “There is chemistry between us and the fans. They help us to create that energy,” says Devonte. “We do what we do with joy and happiness, not really worrying about the success of it,” adds Tanto. Along with their humble approach, the striking contrast of Devonte’s silky smooth tenor and Tanto Metro’s hard-hitting swaggering rhymes provides the perfect balance to breed their widespread success even further.

Today, the veteran hit makers and creators of two of dancehall biggest radio records, “Everyone Falls In Love” and “Give It To Her,” continues to add magic to the music industry with their usual mixture of melodic hooks, humorous rhymes and catchy rhythms with their new singles from their upcoming album “Hey Ya Hey” and Jam It So featured by Sly and Robbie which is taking the airways by storm. Keep listening as they continue to compose good music.

For more information on Tanto Metro & Devonte’s schedule or to book the artistes, please contact: