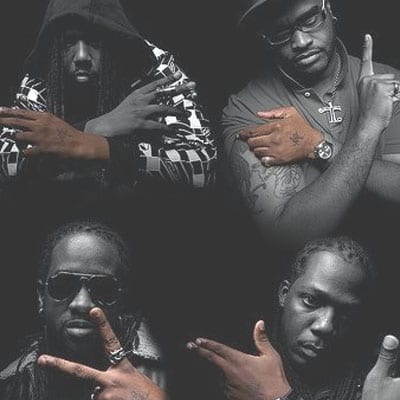 Hailed by the New York Times as “the world’s greatest dancehall-reggae boy band,” T.O.K. has been Jamaica’s leading dancehal…l group for over a decade.

Since emerging on the scene in the late 90s, the Jamaican vocal quartet has produced numerous hit songs and albums, cementing their position at the top of the entertainment industry.

From their generally tough stance, it’s hard to believe that the reggae dancehall crew known as TOK was originally inspired by crooners Boyz II Men, but that’s the way it was. Alistaire McCalla (Alex), Roshaun Clarke (Bay-C), and Craig Thompson (Craigy-T) were all in the school choir at Kingston’s Campion College, while friend Xavier Davidson (Flexx) attended Calabar High School.

The four singers began T.O.K. – the acronym originally stood for Touch of Klass. In the early ’90s, when Motown’s glee club foursome was sweeping everything before them with their harmonies, TOK began by performing R&B covers, but that inevitably changed. As Davidson explained, “We’re Jamaican. That has to come out in the music, and that’s what happened, gradually.”

In 1993, they placed second in the annual Tastee Talent Contest. Though they didn’t win, their appearance helped bring them to Nuff Records, where they recorded a few tracks for the label, although nothing hit the charts.

By 1996, they were on Sly & Robbie’s Taxi label, where the single, Hit Them High appeared, again making no real impact. From there it was on to Main Street, where they encountered engineer Richard Browne, who was about to start his own label.

TOK opted to go with the engineer, who was just a couple of years older than they were. Their first effort for his new High Profile label went nowhere, but the follow-up, Hardcore Lover, which teamed them with dancehall queen Lady Saw, rose to number four. Although High Profile didn’t last, the pairing of Browne and TOK did. He became their manager and often produced their records. And it seemed as if they could do no wrong, releasing a series of singles like Whoa and Ill Nana that kept crashing into the charts. But by now, their style was far from where it had begun. They could still harmonize and occasionally would on tracks, but dancehall had become a much bigger influence and their sound had turned harder – hardcore dancehall, in fact – influenced equally by Jamaican sounds and the U.S. hip-hop on MTV, and it was well-received. This was apparent in 1998, when Eagles Cry (a nod to Prince’s “When Doves Cry”) gave the band their first number one.

In 2001, TOK released My Crew, My Dawgs on their own XCAR label/VPRecords, with many of their hits such as Money 2 Burn and Shake yuh Bam Bam included. That year, T.O.K. appeared on MTV’s first “Advance Warning”- a prestigious nod to up-and-comers – and on the very first season of BET’s “106 & Park,” well before any dancehall artist graced that stage.

Their 2005 effort, ‘Unknown Language’, would feature the hit ballad Footprints along with a guest appearance from Miami rapper Pitbull on the single She’s Hot. This was the sole collaboration on the album and was a major hit for the group, crossing over into the international market, reaping major commercial success for the group.

The video for the first single, Gal You Ah Lead, was selected for MTV2’s “New Faces of MTV2”, made its debut on MTV’s “Direct Effect” and was among Blender Magazine’s “Top Songs of 2004”.

The second release from the album was the hit Footprints – a song written about the escalating violence in Jamaica, and the personal loss experienced by the members of the group. “Footprints” went to #1 on several local and International Charts, and when T.O.K. released “Unknown Language” soon after, the album sales went Gold in Japan in its first week on the shelf, and quickly went on to sell Platinum.

‘Unknown Language’ also produced a number of other hits, among them, Hey Ladies, Galang Gal, Solid As A Rock, Fire Fire, She’s Hot and Gigi Winer.

Flexx highlighted, “The music videos for Footprints and Gal You A Lead (which were also cross-over hits) were played on all the major music stations both locally and abroad and even entered the Hot 100 Billboard Charts, and all of this was done without the support of a major record label, and that spoke volumes about the power of our brand”.

For the following years, TOK broke into several markets: in 2010, they performed in Russia and Zimbabwe for the first time, Nicaragua in 2011, and in 2012 they did shows in Sicily and Israel. There were also performances in other new markets like the Czech Republic, Hungary, Kenya, Tanzania and Uganda.

“These are places that dancehall is not that established, so when you go into Eastern Europe you don’t usually find that much dancehall activity,” Bay-C said.

In 2009, TOK released the album ‘Our World’ which featured songs like Couple Up, Guardian Angel, the latter becoming the number 1 downloaded ringtone in Japan, outselling imports from other genres as well. “This again shows the power of the brand of TOK and Dancehall,” Bay-C said.

However, in 2011, fans worldwide were hit hard with news that the journey of the legendary reggae/dancehall group could possibly come to a sudden halt by a potential break up. The group dispelled all suspicions with a renewed energy in 2012 embodied in their Yardie single done for their country’s 50th anniversary celebration of independence.

The group performed the single at the National Grand Gala, held at the National Arena, which was part of the ‘Jamaica 50’ celebrations.. But the celebrations did not stop there, as TOK later embarked on a tour of Europe, using their Yardie single as the platform for many of their shows.

“At the time, Yardie was the single that we were promoting and so we went all out every night wearing the Jamaican colours, we even went as far as having special masks made in Jamaican colours, which was a hit with fans across Europe. That year was Olympics as well, so we had a lot to talk about during our performances, as we promoted brand Jamaica alongside brand TOK,” Craigy T explained.

In 2012, however, it was time for TOK to close a longstanding chapter in their musical journey, and as Bay-C rightly put it, “we severed a ten year tenure with VP Records, as the group felt it was time to embark on a new chapter.”

Immediately, TOK made a trek to Israel for a reggae concert, the group being the headliner for a show called ‘Reggae in the Desert’. During their stint there, the group also seized the opportunity to shoot a video for their first single post VP Records, entitled The Voice. This was the first single off the group‘s fourth studio album entitled ‘4Ever’, which was released in April 2013 in Japan. Later that year TOK joined forces with super producers Major Lazer for the smash hit Shell it Down on the Bumaye riddim.

With the first season of their reality series “Taking Over” airing online and on local channels along with worldwide syndication and the final touches being put on their fifth studio album, TOK seems poised for an even more successful second chapter of their career.

For TOK, it’s all about a new image, new attitude and a new sound for 2014 and beyond.