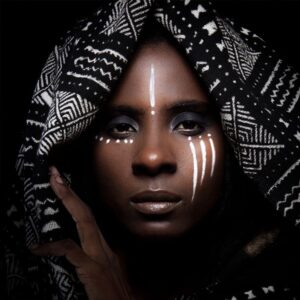 For those who’ve been waiting for Rasta consciousness to mount a resurgence in contemporary reggae, Jah9 is a figure of revelation and deliverance.

A true sister of the faith she first caught the attention of many with the release of her lilting and comedic music video for “Avocado.” Though that production visually represented her African-centric sense of couture, cuisine, style, sensuality décor and even tableware, it barely prepared us for the evangelical force and fury Jah9 would be delivering to roots music in short order.

When heard in the full flower of older songs such as “Steamers A Bubble,” “Jungle” and “Gratitude” Jah9 was revealed to be a singer and poet of considerable range, soul and jazz inflected melodicism. Also as those who’ve seen Jah9’s fiery and righteous live shows can testify, she is hardly a made in the studio chanteuse incapable of translating to the stage with abundant dynamism.

The product of a strong upbringing, by two hard working culturally and politically engaged parents, Jah9 (born Janine Cunningham) is also a university graduate, a multidisciplinary yoga instructor, a youth at risk counselor and a slamming dub-poet champion. The combination of intellectual rigor, real world activism and lyrical musicality is well on display in her sophomore album ‘9.’ Thematically there is no slacking in spiritual advocacy, oppositional militancy or honed and focused tunefulness.

What is most palpably novel however is the intimacy of Jah9s address to the menfolk in her circumference— notably with respect to such issues as machismo, respect (or lack thereof) for the binding, sustaining forces of feminine energy, family, children and the necessity for principled integrity in frontline romantic relationships. Attention paid to the lyrics of “Greatest Threat To The Status Quo” will yield these incisive gems of insight: ”We are not separate /All emanating from the same divine plan/ So persecution of the feminine is the reason for the state the world is in/ A spiritual woman is the greatest threat to the status quo/ The fruits she will bare/ The power she has access to.” Ditto can be said for these lines from the harmonically sophisticated “Natural Vibe,” a song of tightly coiled desire:” My senses do not deceive me /These intense vibrations will crescendo 1 day real soon / This complicated melody will find its harmony in tune When the stars are aligned under the height of the moon.” The first single and video “Humble Mi,” which sounds at first like a traditional Rasta chant, extends the form to reveal a personal journey into relationship with the “creator.”

Beyond her strengths as a lyricist, Jah9 is delivers an impressive performance as primary producer of this nine song project. With collaborators, including Andrew Campbell, Brecht De Beover, Wayne ‘Unga’ Thompson and Earl ‘Chinna’ Smith, Jah9 has delivered in 9 an album, nay, a sonic site of resistance and revelation. 9 fulfills the promise of her earlier releases with expansive maturity, prophetic purpose and even deeper displays of warrior-goddess prowess on the mic.