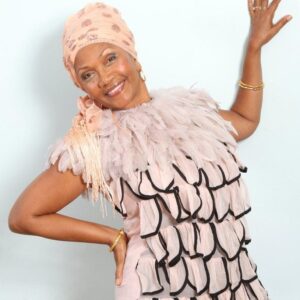 Empresses are celebrated for their grace, charm, and propensity to inspire. Over the years Marcia Griffiths has epitomized such regal qualities, commanding respect from listeners and rightfully earning her coronation as the Queen of Reggae Music. But the matriarch of Jamaican music was not born into royalty. Like many families living in West Kingston in the days of British rule, the Griffiths were not exempt from poverty’s grasp. For a young Marcia Griffiths, this reality was escaped through singing in church, and occasionally learning popular Ska and American R&B tunes. With her unique and compelling voice, the teenaged Griffiths quickly gained attention from several key players in Jamaica’s developing music industry.

By age 12, Griffiths had already won the admiration of reggae pinoeer Coxonne Dodd,
owner of the esteemed Studio One. Under the tutelege of Dodd and his team of producers-engineers, Griffiths’ adolescent voice was fine-tuned, eventually blossoming into one of the island’s most sophisticated. On releases like “Melody Life” and “I Feel Like Jumping,” Griffiths demonstrated an early sensitivty to tonal subtleties, often sacrificing forcefulness for graciousness, leaving enough space for her backup singers to shine. It was this quality that made Marcia a natural go-to for fellow Studio One crooner Bob Andy.

Bob and Marcia, directed by producer Harry J, recorded pop covers and a handful of original songs that routinely livened up dancehalls, becoming the soundtrack to a youthful, newly liberated Jamaican generation. The duo’s debut recording, “Young, Gifted & Black,” a song that symbolized the state of Jamaican music in the 1960s, eventually attained overseas acclaim, reaching number five on the United Kingdom’s choosy charts. As one half of Bob and Marcia, Marcia symbolized the growing importance of female roles in Jamaica’s male-dominated reggae scene. In retrospect, Griffiths notes “it [was] a rough, tough job standing up as a woman in this business” and yet, the fearless young woman left Bob Andy and the world of Jamaican pop music to pursue her solo career with High Note producer Sonia Pottinger. During this time, Griffiths recorded Indomitable a testament to her experience as a female in the recording industry. Griffiths explains the title’s meaning as “not easily discouraged or
defeated,” later adding “my views on women in reggae are positive; most of the new…female singers in reggae started out singing my songs before doing their own… I feel very good about that; to know that I have influenced my people positively.”

Positivity became central to Griffiths’ music in the years following Bob and Marcia. Her music gradually took on a tone of sharp political awareness, illustrated chiefly through tracks such as “Stepping out of Babylon.” Griffiths’ shift from popular to Rasta-centric music was no doubt attributable to Bob Marley’s increasing influence on Jamaican culture. She found herself a friend and band mate in Rita Marley, Bob’s wife, and along with Judy Mowatt, formed the I-Threes. As a central member of the Ithrees, Griffiths regularly provided treble backing for Bob Marley and the Wailers, supporting Marley’s rich melodic canvas during his most memorable live shows.

At present, the enduring songstress continues to excite audiences of diverse generations. Performing her own brand of dance-inspiring Lover’s Rock, Griffiths has an unmatchable ability to win new fans, proving her resistance to obsolescence and her ability to transform at the same pace as the music. Currently she is celebrating 50 years as an integral part of the reggae music industry.

Empires are not built within days. Rather, they are the result of decades filled with hard work and devotion. Needless to say, the most successful rulers reflect this undying devotion. It is for this reason that Marcia Griffith has been bestowed with the title Queen. With a timeless sound, and a tireless dedication to hard work, this queen’s reign shows no signs of decline. For Griffiths, so long as music is alive, her job remains unfinished, noting that “music alone shall live…it’s not…for the money, but the satisfaction I get from doing the work that I love, that is what really keeps me going everyday.”